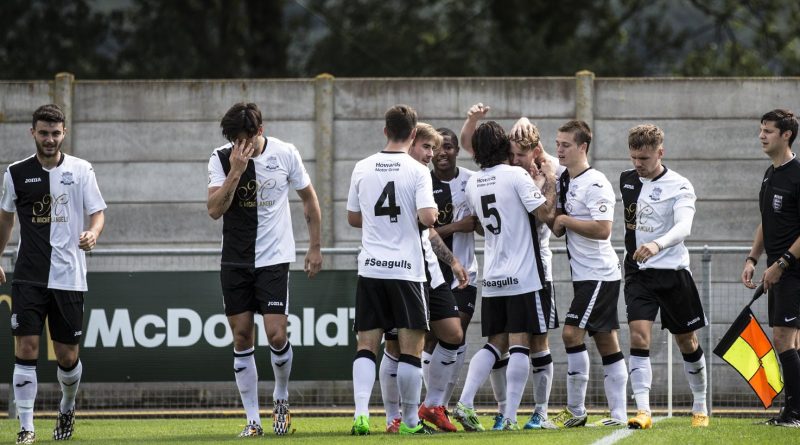 With the new season finally upon us, the boys were feeling confident and we were raring to go. Clearly, the paying public of Weston were similarly enthused, as a full 108 more people bought season tickets to see the Seagulls in their first season in the top flight of non-league football. This is still not going to sell out our newly finished stand (whenever the damned thing is ready), but every little helps. 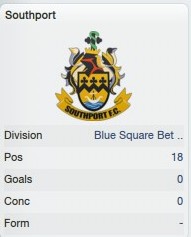 For our first test in the new division, we had to travel to Southport to take on a team that were also predicted to struggle this year and could only manage a 17th placed finish last season. Realistically we should be looking to beat them, especially if we want to make a good fist of staying in the division.

I handed a number of players their debuts. Jack Dovey, Lee Nassir, Matthew Martin, Latvian Tom, Yannick Texeira Barbosa, Wade Small and Norwegian Mo all made their first appearances for the club alongside Cherno Samba, Gavin Whelan, and Brian King. Gareth Seddon and Kostakis Artymatas both made the bench, as did Scott Brown. It was all change for Weston and those few fans that hadn’t seen us in our packed preseason were excited to see how the team would fare.

As it turned out, we fared pretty well overall. We went behind early and Southport were pretty dominant in the first half, but that said we were playing nice football, even if we weren’t clocking up too many shots on goal. Indeed, it wasn’t until after half-time that we actually successfully hit the target, but when we did, boy what a shot it was! The ball fell to Samba on the edge of the area from a long ball up the pitch and, despite the usual shades of offside, Samba smashed the ball into the top corner to restore parity. The boys heads were up and we started to push back Southport. Our pressure wasn’t converted into chances, however, until the ball found its way to Wade Small. A poor clearance fell to Small inside the box and he didn’t need to be asked twice to finish sweetly for his first goal for the club. 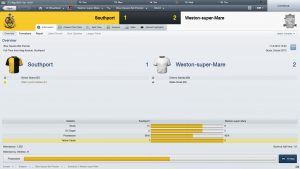 Not bad for our first game in a new league. We came from behind to win, we scored with all of our shots on target, and we beat a fellow relegation battler. Not bad indeed.

Our next game came against a giant of a club. Grimsby Town were predicted to come third this season having narrowly missed out on promotion last season. They have a huge history of playing in the Football League and are definitely one of the big fish in the Blue Square Premier pond this season.

Of course, that didn’t stop their manager, Rob Scott, from chipping off about my team in the press before the game. Not content to be the favourites, he also tried to stick the boot in by claiming that we would struggle to stay up this season.

Before that, I might have been tempted to say that any kind of result here would be a bonus. But now that Scott has given my team talk for me, the boys were riled up and wanted to get one over on the arrogant fool.

We got more than one over them, we got three! What a result and what a performance. They were never really in it. We scored twice in the first 30 minutes and, despite them pulling one back late on in the first half, we were comfortable, limiting them to long-range chances that were poor. In the second half we pushed on and really went for it, culminating in their keeper scoring an own goal late on to seal the points for the Seagulls. 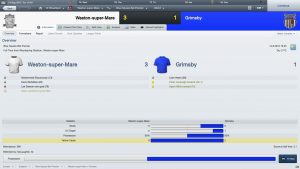 Norwegian Mo got his first goal for the club and we played far better than our lowly reputation suggested we would. In the end, we sent the 580 who attended home happy and made Rob Scott think twice before attempting mind games against me in future. Mug. 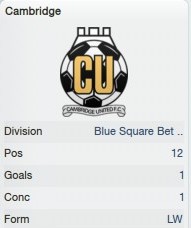 Things are all looking rather good at the moment and confidence in the dressing room is sky high. But this division is full of tough tests and this next game was sure to be a challenge to our early season form. Cambridge United are another former Football League side and were predicted to finish fifth despite an underwhelming 11th placed finish last season. Add the fact that we were away from home and I could easily see how this game could derail our momentum.

Not so, however! We came, we saw, we conquered! Cambridge didn’t know what hit them as we gave them an absolute pasting. Gareth Seddon got his first two goals for the club and Brian King added two more from midfield to leave the 2,722 strong crowd booing the hosts off of the pitch at full time. Our fans were jubilant, loudly cheering the boys throughout and giving them a standing ovation as they left the field at full-time. 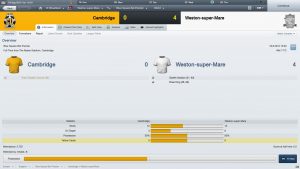 Cor, we are in some form! I tried to keep the lads grounded after the game by taking them for some fish and chips on the way back to Weston. Nothing says “you’ve won nothing yet” like getting Big Cherno to order 18 cod, chips and curry sauce from the local (and very greasy) chippie on the way home from a big win. Eat up, lads! 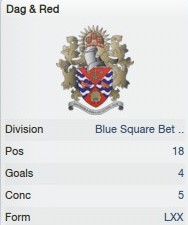 Our final game this month was against Dagenham and Redbridge, a side that was relegated from League Two last season and who were predicted to bounce straight back up. Surely we couldn’t beat another side that the media were predicting to turn us over easily?

Surely we could; our ridiculous run continued. We started the game strongly, although the game was clearly more even than in our game against Cambridge. We were handed a chance to take the lead in the 23rd minute as Big Cherno was hacked down in the box. Up stepped Brian King to smash home his third goal in two games to put us ahead. The Daggers were clearly riled and for the following few minutes we had the upper hand. Luckily we managed to take advantage of their brief period of uncertainty as Norwegian Mo cut in from the left to whack home our second and send the 771 fans in the Woodspring into delighted cheers.

The second half was tougher for us as we lost the influential Gareth Seddon early on to injury. After that the game settled down a bit and, although Dagenham and Redbridge did get one goal back in the 77th minute, we were never seriously under threat as we held out for yet another three points. 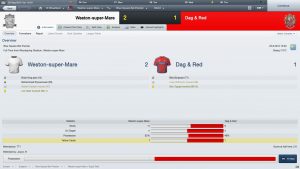 This was an impressive result to go up there with our big win against Cambridge as it showed we have the ability to grind out narrow wins against the bigger teams.

Unfortunately. the news from the physio room was not good as Seddon was ruled out for at least the next month. He has started the season well for us and to lose him early is a big blow. Luckily I have loads of cover up front, but Seddon is still our best striker and to lose him will definitely blunt our attacking options.

So, after four games we sit happily atop the table, although that is not something that I expect to continue for too long. We have had some big results this season already and we are looking good; maybe just avoiding relegation was a bit conservative, but it is still early days yet.

We have a busy month in September with a mammoth seven games to cram in. That will be the real test of our level in this division. If we come through it well, we can start to think about looking up rather than down. For now, I am just looking to get the 40 points necessary to keep us up in the division for next season. 12 down, 38 to go.

If you have been enjoying the series so far, drop a comment down below and share it with your friends if you are that way inclined. See you next week!