Phwoar, what a season we are having. A newly promoted team sitting pretty at the top of the league having beaten a number of promotion contenders handily in our first four games. Surely, surely, the Manager of the Month award is mine?

Well, like I always say, it is a team game (although this is clearly a media bias towards the promotion favourites, Wrexham. Typical). I am not in it for the personal accolades; I just want the team to do well. Still, though… As September began we welcomed Lincoln City, yet another team with a rich Football League history, to the Woodspring. They are predicted to come 10th and should provide us with a tough challenge, although given our good form thus far there were a number of people around Weston who were predicting a comfortable win for the Seagulls.

Unfortunately, John Nutter (he’s crazy) hadn’t read the script to such an extent that he thwacked in a screamer within one minute of kick off. This proved to be something of a setback and it took a few minutes for the boys to properly regain their composure. Regain it they did, however, and not too long later we had equalised through an unfortunate own goal from Danny Hone.

We had gotten back into the game but we never really looked able to go on and win it. Lincoln had our number and pegged us back for much of the match. They dominated in terms of chances created, although they didn’t really test our keeper that much. Our goal turned out to be our only shot on target and we were relieved when the final whistle sounded and we had escaped with a draw. This was not a bad result by any means, but the nature of our performance was a little underwhelming and for some reason the lads seemed to be overawed by Lincoln. This is something that I will have to think about in future but right now there is no need to panic. Next up was a visit to Braintree Town. Braintree are predicted to struggle this season and are seen as a contender for relegation. They have certainly done nothing to dispel that suggestion either, having conceded a monstrous 33 goals in their first five games. That said, last season we struggled a bit against teams in the lower reaches of the table, particularly if they had been on losing runs. Surely we had gotten over that problem, right?

Well, clearly Braintree’s fans agreed that their side had little chance of winning, as a paltry number were predicted to show up and watch. They don’t know what they’re missing…

Hindsight is a wonderful thing and those fans who stayed away were spared an abject performance from both sides. It was a dull game of little quality, made even worse because Braintree went down to 10 men just before the break. We were still unable to break them down, however, and every one of the 411 in attendance were enriched by the final whistle as it sounded. It was another dire performance and this time a disappointing result considering the form and position of the opposition, but a point is a point and we are still unbeaten. In fact… So, another weak team near the bottom of the table and in dreadful form, conceding goals for fun. Surely another disappointing result is on the horizon? At least we can try and keep our unbeaten run going, right?

Actually, yes, we can. And we can grab a deserved win, courtesy of Big Cherno’s magic boots. As you can see from the stats below, we absolutely battered Altrincham and were more than deserved winners, despite them grabbing a goal back in the second half. I was never worried about the result, although I would have liked us to have converted our dominance into a more convincing scoreline. Still, we are at least back to winning ways, Cherno is back amongst the goals, and our unbeaten run is now 13 games long. Times are good. So we travelled to Stockport County on a high. They were predicted a decent finish in the league this season but have struggled in the first few months of the season and find themselves one place above the bottom of the table. Surely, surely, we can’t mess this up?

Just for good measure, Kostakis Artymatas went and injured himself whilst having a cheeky run out for the reserves. Not what we need; he has been the player we bring on when our central midfielders are struggling late on in games. It’s hardly the end of the world, but our options are now limited.

Nevertheless, we did the job without Kostakis and came away with a confident 0-2 win. Finally, a comfortable win against a struggling side, something we rarely manage to do, I feel. That is nice to see, as was the finish of Norwegian Mo who scored a fantastic goal from the edge of the area, turning his man inside out before curling a finish into the top corner. Beauty. One disappointment was an injury picked up by Cherno Samba. He hasn’t been scoring too many this season, but he is continually influential in games and plays better than our other forwards. Unfortunately, he will be out for the next two weeks, so we will have to try and make do without him.

Now for a serious challenge. Wrexham were predicted to win the division this season and they have started strongly. They were sitting third before their trip to the Woodspring, safe in the knowledge that if they won the game they would claw back some ground between us at the top of the table and them. Luckily for us, we seem to play up in big games like this, so I was confident of at least holding them to a draw.

But it seems that whatever I predict, things turn out the opposite. Neither side was particularly dominant, and we matched them in all areas of the pitch in a hard fought contest, but unfortunately for us the loss of Samba took away some of our ruthlessness up front and we were unable to take any of our chances. That, mixed with an opposition who score with every single shot that they have on target, is a great recipe for defeat, and that was exactly what happened. Over 900 packed into the Woodspring to see us play but unfortunately we were unable to pay their support back with a win. The result was a disappointing one that put Wrexham one point ahead of us in the table. That is not ideal, but we should remember how little money we have to spend on players, plus the fact that we are still only part-timers, as mitigating factors when being beaten by such illustrious opponents. Excuses… This division really is full of illustrious clubs. Luton Town have won the League Cup, the Football League Trophy, and have spent two separate spells in the old First Division. Whilst they have suffered a huge change of circumstance in recent years, it remains the case that at their lowest ebb they meet Weston-super-Mare, a team competing at their highest level since their foundation in 1948. For them we are nobody; to us, they are the closest we will come to playing footballing royalty for the next few years. One other thing to mention is that finally, after a nasty injury near the end of last season, Marc Hughes was fit enough to play in the first team. I was allowing him to come back slowly, but with the lack of goals from our strikers and with Big Cherno injured, I thought the time was finally right to bring him back into the fold… Let’s make the most of it.

Oh, we very nearly beat them! We took the lead in the 40th minute through Norwegian Mo who scored a wonderful individual goal, leaving about five of Luton’s players on the floor as he did so. We were confident and playing well, but early in the second half, we lost Liam Darville, our left-back for the day, to injury. His replacement, Martin, never looked comfortable, and their eventual equaliser came after he was beaten out on the left. A bit of a punch to the guts, but still an entertaining game to watch and a magnificent result for us considering that we were playing away and in from of over 6,000 fans, something that the lads aren’t used to. 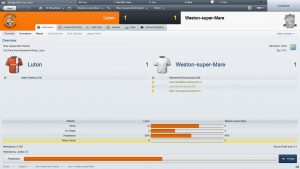 It is never completely positive news, though; poor old Marc Hughes. He does brilliantly well to get himself back into the team after a long injury lay-off, but then goes and gets himself injured again. Hopefully, he can come back and start banging in the goals for us soon.

With the results of September in, we find ourselves sitting top of the table on goal difference, just ahead of Wrexham. Had we managed to beat them we would be sitting pretty and clear at the top of the league. This division is clearly all going to be about fine margins, so we need to make sure not to draw too many games against the weaker sides.

Next month looks to be a relatively quiet one with just four games to play. However, they are all tough games against sides that are looking to challenge in the top half of the table. It would do our season well if we can come through October unbeaten and with a few wins under our belt. We are now over half-way to our 40 points target. We look like we might stay up comfortably, but let’s not get complacent just yet…

Thanks for reading! If you are enjoying this series, say hi in the comments or send your abuse to me on Twitter (@BenWheatland). See you next time!