Ok so, at this point, perhaps simply avoiding relegation is a bit of a lame target, given that we are almost certainly safe already. Let’s aim for mid-table…

For once I was not upset about not winning Manager of the Month, although we did only concede one goal last month and I hate Andy Morrell, I hate him, I don’t care that he won all his games and we won three and drew one, I hate him.

Some good news did at least sooth my unreasonably angry mood, as the chairman sent me an email to confirm that the new seating areas at the ground were complete.

This is excellent news as we can now offer seats to 500 additional fans. However, as the condition of the Woodspring is officially ‘poor’, the new 500-capacity standing area was probably just hammered together using some wooden pallets found in the local tip. I don’t know, it’s not my job.

Anyway, enough cynicism, let’s crack on with our promotion push consolidation of a mid-table position. 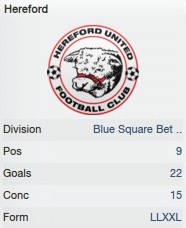 First on our hit list was Hereford United, the side that would be first to bask in the glory of our newly expanded stadium. They were having a reasonable season and were within touching distance of the playoffs, although their recent form was poor (always a bad omen).

Luckily we threw off our hoodoo for facing sides in poor form to grind out a well deserved if unspectacular 1-0 win, Big Cherno Samba grabbing the only goal of the game just before half time. This was as routine as routine wins can be and we sent the 1200+ crowd home happy. 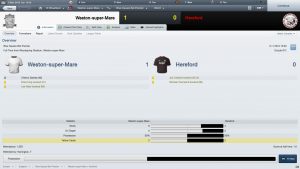 After our win, I praised the mentality of the lads to the local press and signed a few autographs before retiring to the club’s board to watch the FA Cup First Round draw with the squad. We were hoping for a plum draw. Perhaps we would welcome a League One side, maybe we would be able to really test ourselves against a tough League Two side, or even get gifted a tie against a team from below the Blue Square divisions that would allow us easy passage into the second round…

Nah, we got Boreham Wood. 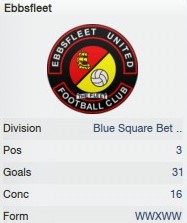 Well, smarting from that disappointment (sorry, Boreham fans), we picked ourselves up for a second home game in three days as we welcomed third placed Ebbsfleet United to the Woodspring. The Fleet were in fantastic form and were hot on our tails so it was sure to be a fascinating encounter. I definitely wouldn’t be using the short turn around in between fixtures and the inevitable tiredness as an excuse…

A fascinating encounter it certainly was, full of drama and excitement, but, unfortunately, it went the way of Ebbsfleet who just about edged a tie that either side could have won. We took the lead through another headed goal from Gavin Donoghue, who is now rapidly climbing our goalscoring charts. However, the lads seemed to take their foot off of the peddle in the second half as goals from Tom Phipp and Ross Smith allowed the Fleet to turn the game on its head.

It briefly seemed like we had recovered to earn ourselves a point when Yannick Texeira Barbosa scored from close range to level things up in the 88th minute, but Tom Phipp popped up in the 93rd minute with a long-range screamer to leave us with nothing and to allow Ebbsfleet to overtake us in the league table. A disappointing result, but given we had only had three days to recover whilst they had had a week (plus we are part timers!!) did give us confidence as we were still able to give them a good game and push them hard. It turns out that I did use the tiredness thing as an excuse. Ah well… 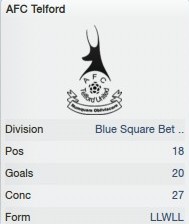 Do you remember AFC Telford? We got thwopped by them 4-2 in the FA Trophy last year. At the time they were in the division above us. Now, we are third in the league and they are yet again fighting off the threat of relegation. Could the thwopper become the thwoppee?

By gum, we thwopped them good and proper! That was about as comprehensive as an away performance can get. We absolutely dominated from start to finish and the game was effectively over by half time after goals from Gareth Seddon, Dean Lawrence, Norwegian Mo and Big Cherno had us cruising into the break.

Things were looking good for us and we continued our dominant performance in the second half. Ok, we didn’t score as many, but we kept them pinned back for much of the rest of the match and restricted them to a single shot. They did score that shot, admittedly, but then Big Cherno waltzed through their defence almost immediately afterwards to restore our four-goal cushion, a margin we never threatened to let slip. What a response after the disappointment against Ebbsfleet, very satisfying. Plus it is always nice to get one over on a team that has previously beaten you, and our fans didn’t let the Telford fans forget it. 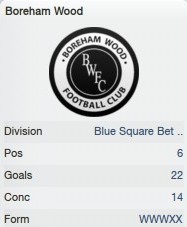 A week after the Telford game we made the trip to Boreham Wood’s Meadow Park stadium for the club’s first game in the First Round Proper of the FA Cup under my management. Despite our disappointing and uninspiring draw we could at least try and make the best of the draw which saw us taking on a team from the division below and which offered us a pretty good opportunity to progress to the next round (where we might finally get to play someone like Crewe).

Boreham Wood, however, were in decent form and were sitting just outside the playoff places in the Blue Square South. This wouldn’t be an easy tie by any means, but if we were professional (or, more appropriately, semi-professional – thank you, board) we should be able to come away with a win.

We lost 3-1. We started badly, picked up a bit briefly as Big Cherno thwacked home an equaliser, and then dropped off big time and were picked off as we pushed for a late equaliser. Not a game for us to remember for long, let’s just move on. 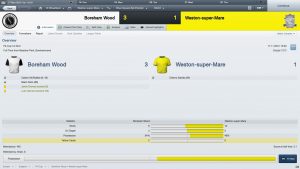 At least we were out of the cup, giving us fewer distractions from our league exploits. The prize-money from a good cup run would have been nice, but it can’t be helped now.

Of course, upon hearing that we weren’t too disappointed to have been knocked out of the cup, the footballing gods decided to strike us with more misfortune. Kostakis Artymatas did his thigh during the game and will now be out for over a month. Just the news we need when we are being forced to play two games a week most weeks… Back in the league, it was time to welcome bloody Truro City to the Woodspring for the first time since our promotion challenge last season saw both clubs fight tooth and nail to gain the one automatic promotion spot in the Blue Square South. Despite not being able to beat them in the league last year we went up automatically, but they managed to join us in the Blue Square Premier this season after they triumphed in the playoffs. They also knocked us out of the cup last year, so we have a few scores to settle. Luckily for us, they are in dreadful form and look like candidates for an immediate return to the regional divisions.

Revenge is sweet! Finally, at the fourth time of asking, we have beaten Truro! Big Cherno got the goals that sealed our win, taking great joy in condemning Truro to defeat in our newly expanded ground. Barry Hayles grabbed a late consolation goal to set nerves jangling as they briefly threatened to grab an equaliser, but our defence held firm and our fans were finally able to celebrate getting one over on a club that seemed to have our number before. It felt so good to beat them that I treated the whole team to an ice cream each afterwards to celebrate. I am a good boss. After the unbeatable high of getting one over on our rivals, we rounded off November by travelling to Nuneaton, a club languishing in mid-table. They had lost their last two and their players looked a bit low on confidence, so I gave a rousing team talk to the lads, telling them passionately that I believed they were the better team and that they should go out and prove that to their fans.

It was a good plan, as we ended up walloping Nuneaton 3-0. Big Cherno opened the scoring, grabbing his seventh goal of the month to set us on our way. Just before half-time, we doubled our lead, centre-back Gavin Donoghue staking his claim for the club’s top scorer award by powering a header past the hapless Nuneaton keeper from a corner just before the teams headed to the dressing rooms.

The second half was a great display of game management as we held Nuneaton at arm’s length without exerting too much of our own energy. We even managed to extend our lead on 72 minutes as Donoghue again nodded home from a corner to add some gloss to the result. In a game of so many positives, there was one major set back as Cherno Samba was forced to leave the pitch late on after a heavy challenge from a Nuneaton player. It was immediately clear that Samba had broken his arm, ruling him out for at least two months whilst he recovers.

This was a massive disappointment for the lad who had only just recovered from another injury and was in fantastic form. Such good form, in fact, that he was awarded the Blue Square Bet Premier Player of the Month for November, having scored six goals in his five league games for the club.

We ended the month in good form and were even sitting back on top of the table, albeit having played a game more than both Ebbsfleet and Wrexham who would overtake us if they won their games in hand. Nevertheless, this was a very positive month and I was pretty happy with our results.

It would have been better not to be knocked out of the FA Cup by lower league opposition, and had we beaten Ebbsfleet we would be five points clear at the top of the league, but you can’t always have everything.

Next month sees us face a number of mid-table teams. We will have to make do without Big Cherno, but I am confident that we can manage some good results without him.

Thank you for reading! If you have liked this series so far, please give it a like and share it on social media so that some more crazy people might also get involved. Until next time, cheers!