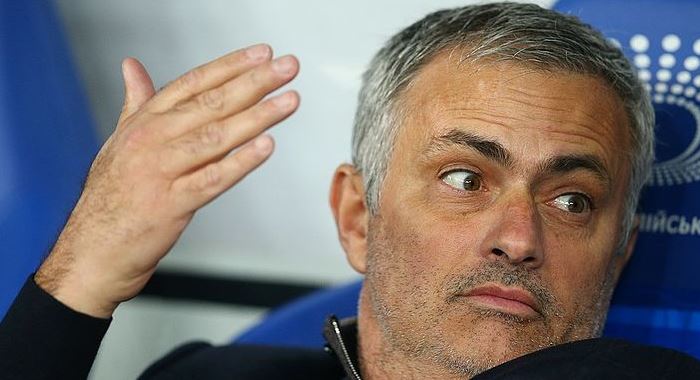 Sylvain Wiltord’s goal to give Arsenal the title in 2002, the infamous Keown and van Nistelrooy incident after the penalty in 2003, the end to Arsenal’s 49-game-unbeaten run, the Pizza thrown at Sir Alex in 2004, the 8-2 in 2011 as well as the countless fights and red cards down the years. All of these classic Manchester United vs Arsenal moments remain fresh in the memory ahead of Saturday’s meeting but this season, as if it needed it, the game has an added dimension. It’s Mourinho vs Wenger.

Arsenal fans can be forgiven for being extremely concerned at this prospect. The hatred between the two is football’s worst kept secret and it’s made all the worse for Gunners fans by the fact Mourinho has always held the upper hand. Mourinho has labelled Wenger a ‘specialist in failure‘ and suggested ‘Only one manager is not under pressure… can not achieve, keep his job and still be king.’ Wenger has hit back, claiming ‘He’s out of order, disconnected with reality and disrespectful. When you give success to stupid people, it makes them more stupid.’ However, on the pitch, there has only been one winner. Wenger has won just one of his 15 meetings with Mourinho in all competitions, the Community Shield final in 2015. Mourinho has come out on top eight times, winning the 2005 Community Shield final, 2007 League Cup final and humiliated Arséne Wenger in his 1000th Gunners match, beating them 6-0. The two even came to blows during that match.

Having said all of that, there might be more similarities between the two than you might think. The recent career trajectory of Mourinho certainly suggests he seems to be heading in the same direction as his old enemy, Wenger. Both managers exploded onto the scene but have followed it up with a period of stagnation.

Despite having won the French league with Monaco in 1988, Wenger was plucked from obscurity in Japan by Arsenal in 1996.. He brought with him a revolution. Arsenal were always known as a strong physical side who were good in the air but when the cultured Frenchman arrived he encouraged the ball to be played on the floor. His side quickly began to earn plaudits for their pleasing on the eye style. It brought success too, in just his second season, he masterminded a league and cup double, a feat he would repeat again in the 2001/02 season. He then achieved the impossible, he guided his side throughout the entire 2003/04 Premier League season unbeaten. It can be argued that this tactical astuteness laid the foundations for Barcelona’s famous Tiki-Taka style. It certainly worked for Arsenal and it allowed him to get the best out of quality players such as Tony Adams, Steve Bould, Sol Campbell, Ray Parlour, Marc Overmars, Robert Pirés, Partick Vieira, Ian Wright and Thierry Henry.

However, things soon turned sour, the move to the Emirates reduced transfer capabilities and soon the ‘Invincibles’ started to drift away. The likes of Campbell, Vieira and Henry gave way to Johan Djourou, Denílson and Nicklas Bendtner and the Gunners didn’t win a single trophy between 2004 and 2014. Teams had figured out Arsenal’s style and how to combat it. Wenger has never again been able to guide Arsenal to those heights, with just 2 FA Cups and Community Shields in 12 years to show for his efforts.

They started to become ineffectual in big games and with Wenger refusing to budge from his methods and becoming labelled tactically naive, Arsenal won only 26 out of a possible 90 points from matches against top-four opponents between 2009 and 2014 (Metro Sport). The breakthrough result being the 2-0 win away at Manchester City in 2015, with Francis Coquelin playing as a holding midfielder. Since then, Arsenal’s results in big games have picked up markedly and Coquelin has become a midfield stalwart but this doesn’t mask years of failure.

Mourinho too achieved the impossible

Mourinho is in danger of going the same way. His big break-out came at Porto, where he also achieved something seemingly impossible. He guided the Portuguese side to the Champions League title in 2004 before moving onto Chelsea. Here as we all know, he guided his side to back-to-back titles, their first-ever. He then moved to Inter Milan, where he won Serie A twice as well as the Champions League, on-route master-minding a plan to defeat Barcelona’s Tiki-Taka style over two legs. He continued this knowledge onto Real Madrid, where he managed to take the 2011/12 La Liga title away from Guardiola’s Barcelona side in their prime. By the time he returned to Chelsea in 2013, his trophy cabinet had swelled to 20 major trophies and he was hailed as a god upon his return. He didn’t disappoint either, winning the sides third Premier League title, all under his stewardship, in 2015. Yet, the next season everything went horribly wrong, he got into arguments with his players, the officials and his own back-room staff and by December he was out of a job as Chelsea put up the worst defence to a title in Premier League history.

Mourinho has faults and insecurities

This showed he is not without his faults and insecurities. These became evident earlier in his career at Real Madrid. There he became embroiled in a vicious war with Pep Guardiola, one which Pep undoubtedly won, he fell out with his players, most notably, Iker Casillas, the legendary Spanish goalkeeper was relegated to cup goalkeeper behind Diego López, and Mourinho became angry and aggressive post-match, he infamously tried to gouge the eye of former Barcelona boss Tito Vilanova. These were all signs that his methods were beginning to lose their  influence. His sides had gained a reputation for winning ugly and focusing on defence to make sure above all they ground out the win. This negativity didn’t go down at all well at the Bernabéu, the club believes in more than just winning, there is a certain way it should be done and Mourinho did not do that. His side even began to lose their touch in the big games, in 2010 they were humbled 5-0 by Barcelona at the Nou Camp.

All of these negative signs have creeped back into his management upon his return to England. As well as his altercation with Wenger in 2014, he has become very negative in the press. After defeat to Southampton in January 2015, he was enraged that a penalty was not awarded for a foul on Cesc Fábregas and suggested that there was a campaign against his side from referees, media and pundits.

“That’s a clear campaign. People, pundits, commentators, coaches from other teams – they react with Chelsea in a way they don’t react to other teams.”

He has also begun to dig his players out for their performances. Last season, the final straw for the Chelsea board was when he came out after the defeat to Leicester and announced that his work had been “betrayed.” It was clear by that point he had lost the dressing room and already there are questions over his relationship with his players at Old Trafford. After Chris Smalling and Luke Shaw pulled out of the recent fixture with Swansea, Mourinho was not happy and voiced his displeasure in public. He said:

“We have players with problems but we have players on the pitch who have problems. In every sport, many times you play and you are not 100 per cent. There is a difference between the brave, who want to be there at any cost and the ones for who a little pain can make a difference. For the team you have to do anything.”

As well as the relationship with his players, Mourinho’s record in big games has been severely dented. Already this season, Manchester United had been on the receiving end of some embarrassing defeats. For the first 40 minutes of the Manchester Derby, they were completely outplayed by their city rivals. They simply couldn’t live with the likes of Kevin De Bruyne and Raheem Sterling. City could have scored  more and, in the end, the 2-1 score line flattered United.

They then went to Anfield and played out a match that severely failed to live up to its billing. The game finished 0-0 and Mourinho was heavily criticised for setting his team up to just play for the draw. Then there was the worst of all. In October, Mourinho returned to Stamford Bridge for the first time as a visiting manager. He had a lot to prove, mainly that he still had it as a manager, after people began to doubt him following the debacle at Chelsea the previous season. This did not go at all well and yet again his side were taken apart. Chelsea ran out comfortable 4-0 winners after taking the lead after just 30 seconds following a mix up between Chris Smalling and David De Gea. The embarrassment was completed when even N’Golo Kanté breezed through the defence and slotted home.

These performances have been so unlike Mourinho sides, who have become known for their outstanding defensive work and ability to grind out results in big games. Right now, it appears that not all of the Mourinho magic is there and Manchester United officials and fans will be worried considering all the warning signs in his character he exhibited at Chelsea are already evident at Old Trafford. He is coming up to a cross roads just like Wenger. Wenger’s style was defeated by Tiki-Taka and Mourinho’s much-maligned defensive style. Similarly, Mourinho is beginning to look old-fashioned. The high-energy game of Mauricio Pochettino’s Tottenham and Jurgen’s Klopp’s high press at Liverpool are taking the game by storm while Mourinho’s genius seems to be receding. For Wenger, it took 10 years to get out of his slump, certainly don’t expect Mourinho to still be at United if his career path follows in the same direction.

He still has time on his side and the benefit of a glowing CV but he needs to finds answers quickly, questions are beginning to be asked and his slump, which saw Chelsea go from Champions to relegation candidates, shows no sign of abating. If Wenger takes the three points in their meeting, this will be rock bottom for Mourinho. He has constantly ridiculed Wenger in the press and holds such a superior record over him. If that goes, what does Mourinho have left to cling on to?

So for the rest of the season, instead of constantly throwing mud at the Frenchmen, Mourinho might be better advised keeping his head down and learning from him. Right now he is on exactly the same course as Wenger and he must work hard to ensure that one day he too is not described as a specialist in failure.