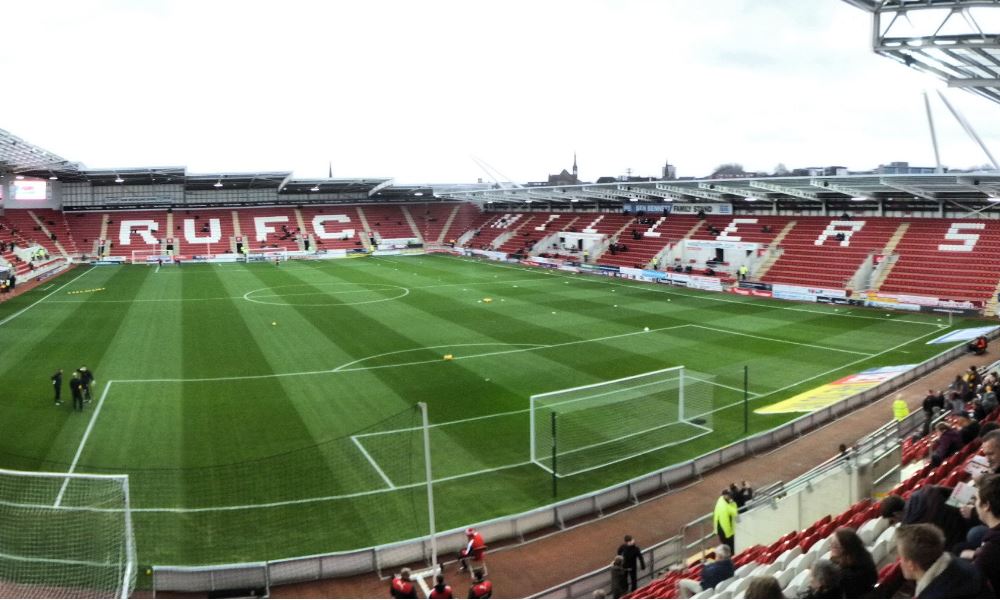 An outstanding first-half hat-trick from Kieffer Moore helped Rotherham United to a 5-0 thrashing of Southend United to demonstrate their promotion credentials.

With a first-half display that is one of the best all round Rotherham performances in recent memory, Southend were blown away and had no answer for their opponent’s firepower.

After a quick start from the home side, they took the lead after just 15 minutes. Ryan Williams broke free into the penalty area before playing in Kieffer Moore who finished well past Southend’s Mark Oxley to open his scoring account for the season.

Just a minute later Rotherham doubled their lead. Moore was this time played in by his strike partner Jamie Proctor from out wide, allowing the Ipswich loanee Moore to finish calmly from close range.

Joe Newell then added a third after just 23 minutes as after some neat build-up play the ball found Jamie Proctor just inside the penalty. He then laid it off for the incoming Newell who smashed the ball brilliantly into the top corner with his weaker foot to put his side three goals to the good.

Rotherham’s outstanding first-half display was topped off by Kieffer Moore just before the break. The forward got his hat-trick when his strike partner, Jamie Proctor, again fed him the ball and Moore from just inside the penalty area made no mistake as he finished well into the bottom corner.

Southend, a side that performed so well last season simply had no answer for Rotherham’s brilliance during the first period. The home side asserted their manager’s style of play on their opponents by pressing high up the pitch to not give their opponents a moments rest. Their aggressive and relentless display goes to show the potential of this side after an impressive summer of preparation.

It is understandable that after such an exceptional first-half, Rotherham took their foot off the gas slightly as the game was already dead and buried, allowing Southend to have one or two chances to grab a consolation. Rotherham ‘keeper Richard O’Donnell had to be alert to make good saves to keep out efforts from Marc-Antoine Fortune and Simon Cox in close succession after 51 minutes.

The Millers did score a fifth after 59 minutes though. Proctor again was the key provider as he played a sublime ball over the top of the back four towards Moore, who played a square ball to Ryan Williams and the former-Barnsley man finished from close range to give himself a well-deserved goal after a fine individual display.

That was how it finished and Rotherham have now made a big statement of intent to the rest of the division by brushing aside Southend in such bullish fashion. It will now be Paul Warne’s priority to try make sure that his players can live up the very high standards set in this game on a regular basis to put in a challenge at the top of the league come May.

Rotherham boss Paul Warne spoke after the game of his delight at his player’s performance during his post-match press conference:

It was an unstoppable first half but the pessimist in me kept thinking ‘we need another goal’. To get the fourth before half time was good. We were trying to get our lads to run off the pitch and they didn’t! A few of them were smiling at half time so we had to keep them on the floor a little bit because they hadn’t won anything yet. It was nice to keep a clean sheet as well. There were some really good performances.

Phil Brown meanwhile could not hide his disappointment after his side were outclassed by their promotion rivals:

It was a reasonable scoreline for them to tell you the truth and it could have been more. You can say, did we have an opportunity in the second half? We had an opportunity to restore some pride in the club, in the badge, in the shirt and we managed to just do that slightly. Great performance from Rotherham, I take my hat off to them. The way they played was first class today and we couldn’t deal with it.

Southend certainly have the players capable of bouncing back from this disappointing result to be amongst the teams vying for a play-off place after falling agonisingly short last season. This result for Rotherham should give them a massive boost after their opening day defeat to Fleetwood. Their first-half display especially highlights the quality that they possess in abundance and if this performance is anything to go by, Rotherham should be challenging for promotion come the end of the season to return to the Championship at the first time of asking.